Sept 16, 2016: Constitution of Nepal, 2072 has been passed by more than two third majority of the lawmakers present today in constituent assembly. Out of 598 lawmakers, 532 take part in the voting process with boycott of 58 lawmakers from 7 Madhesh based parties and 507 voted in support of the constitution. Before, all parts and clauses of the proposed new constitution of Nepal were also endorsed in the constituent assembly today. Chairperson of CA put each and every articles with the amendment proposal towards lawmakers for which they voted with their voice raised high as "Huncha" for yes and "Hunna" for No. This is the fourth day in a row voting in the constitution assembly with three articles passed on First day, 54 on second day and 176 articles on third day. With the amendment proposal in several articles from major three parties and some addition, the total no of articles in the new constitution is increased from 303 to 308.
After the endorsement of every clauses and passing the constitution as a whole, the promulgation date by President is also scheduled for Ashoj 3 (September 20) and will be implemented from that date. So it is now clear that the Nepal's constitution day will be celebrated on Ashoj 3 every year. Meanwhile it is also known that Government has planned to give public holiday on Ashoj 3 and 4 for celebration.
The signature of the lawmakers will be done in the constitution printed on Nepali paper on Ashoj 1 in CA premises and after which it will be verified from CA chairman Subash Nembang. And as endorsed from CA, the promulgation will done on Ashoj 3 by President Ram Baran Yadav at 5 pm. The new constitution will be called "Nepal ko Sambidhan 2072".
This is the second constituent assembly in Nepal's history when the first one failed to pass new constitution within fours years (first two years and extended two years). The 19 days Peoples movement II and the peace accord between Maoists Rebel, Government backed by Seven Party Alliance (including NC, UML) opted CA as the means to write new constitution from Peoples mandate and so 601 lawmakers are elected from 240 electoral through mixed election system. The first meeting of the first CA decided to remove Kingship in Nepal through simple majority. Three major parties tried to bring the constitution with consensus which was not possible then and resulted in dissolving of CA without constitution. The second CA was also in the same situation with dispute in major issues like no. of federal states and the basis, forms of government, election system until mega earthquake came in the picture. 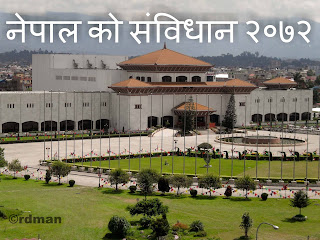 The lawmakers from Madhesh (southern Plain region) based parties and Tharuwan (a ethnic group in Terai) are out of the current constitution making process and are in the street for the demand of autonomous/special region/state for their community. They have walked out of CA after major parties agreed for 7 states which are not according to their demands and previous agreement. With the promulgation of new constitution in Nepal, there are doubts if majority of people will accept it in this form but as 92 percent of the current CA members have taken part in the procedure, it definitely represents the peoples mandate. Though the constitution is being promulgated in this form, there are still ways to address the genuine demands from Madhesh, Tharu based parties now or they can always amend the constitution articles in the form they want, by taking major share in the upcoming parliament through elections. Most of the parts of this Constitution (except Independence, Sovereignty territorial integrity and multiparty democracy) is amendable and this is the major achievement we have got in it. So there is no point in not celebrating the new constitution that is made directly by Peoples representative through constituent assembly.

Here are some of my earlier blog posts in those years of Constitution making.

just so much information Constitution of Nepal bill passed in CA, awaits signature and promulgation