9/11 inside the White House emergency bunker

By jesica di September 16, 2015
9/11 inside the White House emergency bunker - we should be concerned about the development of technology, because the technology selelu give us ease in doing activities, on the blog Techno Review we will discuss a lot of gadget technology from the review spec and price, now we will discuss first about that in your search that is 9/11 inside the White House emergency bunker please refer to the infromasi we will convey in full:

9/11 inside the White House emergency bunker

On July 24, the US National Archives released a series of 356 never-before-seen photos, most of them taken on September 11, 2001 inside the emergency bunker under the White House.

The bunker is officially called the Presidential Emergency Operations Center (PEOC), but White House officials also call it the shelter. It was constructed in 1942 underneath the East Wing of the White House, which was primarily built to cover the building of the bunker. It is said the PEOC can withstand the blast overpressure from a nuclear detonation. 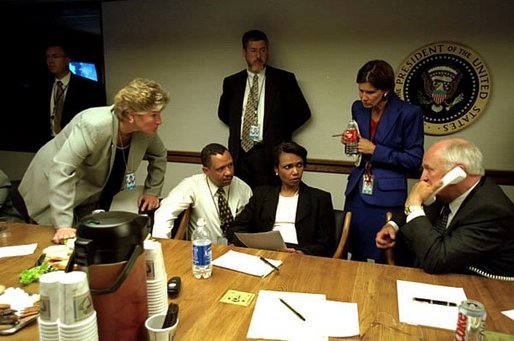 
The photos were released in response to a Freedom of Information Act (FOIA) request filed by Colette Neirouz Hanna, coordinating producer for the FRONTLINE documentary film team. They focus on the reaction from then-vice president Dick Cheney and other Bush administration officials during the terrorist attacks.


How Cheney reached the White House emergency bunker was reconstructed in the official report of the 9/11 Commission, which was issued on July 22, 2004:

American 77 began turning south, away from the White House, at 9:34. It continued heading south for roughly a minute, before turning west and beginning to circle back. This news prompted the Secret Service to order the immediate evacuation of the Vice President just before 9:36. Agents propelled him out of his chair and told him he had to get to the bunker.The Vice President entered the underground tunnel leading to the shelter at 9:37.

In the picture below we see the videoconference set-up at the long side of the room. Within a wooden paneling there are two television screens with the camera in between. Right of the paneling are four digital clocks showing the time for various places around the globe, and there's also a wall map of the United States: 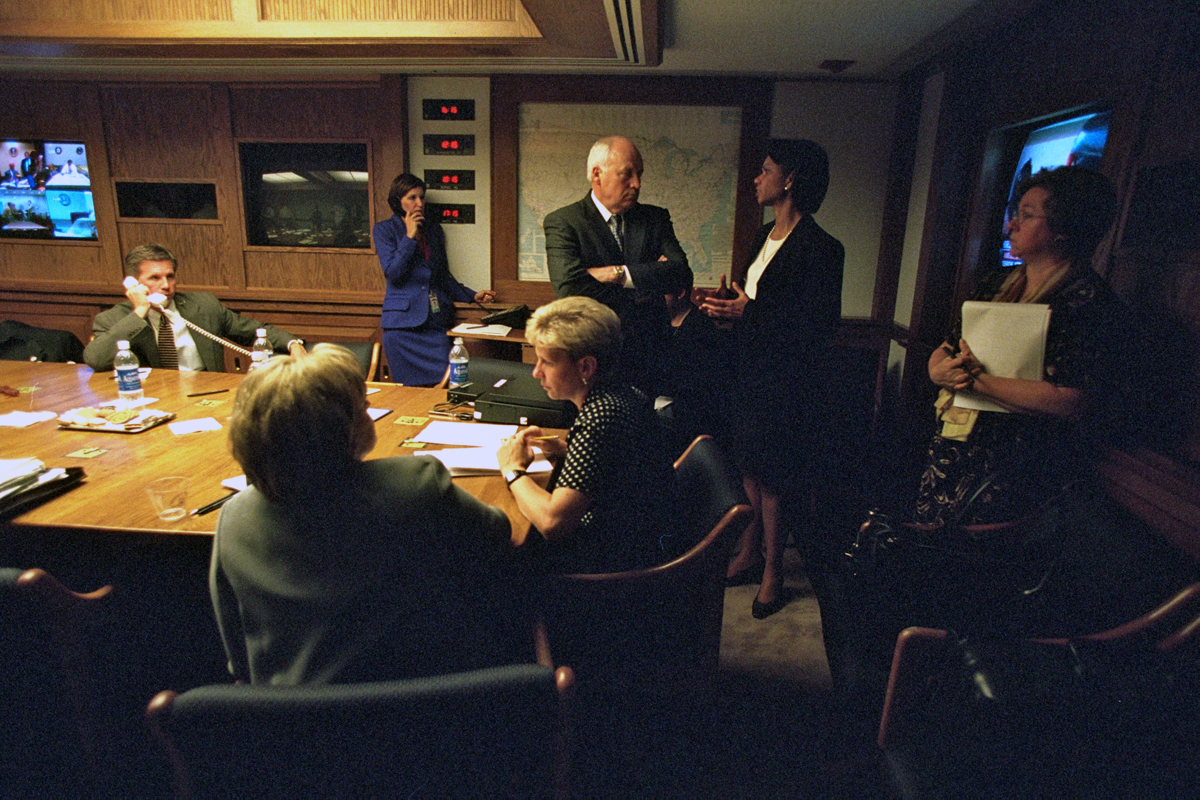 
The next picture shows the videoconferencing monitors at the short side of the room, which can also be used for normal television: other photos show feeds from CNN and Fox. In the corner on the right there's a wooden door with a (mirror?) window. Next to the door on the long side wall, there's a large mirror: 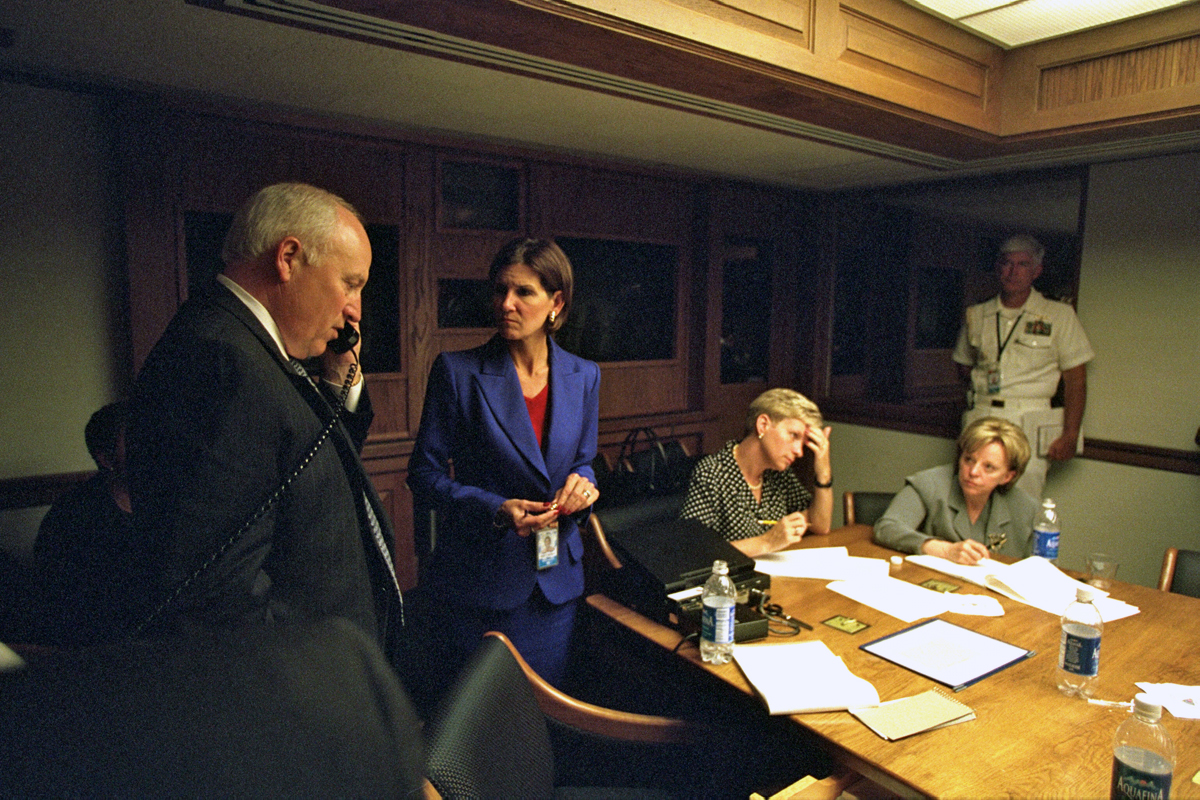 
The wall at the long side of the room opposite to the videoconferencing installation has the presidential seal, which appears behind the person leading a videoconference from the chair in which vice president Cheney was sitting, in order to show that this is the White House: 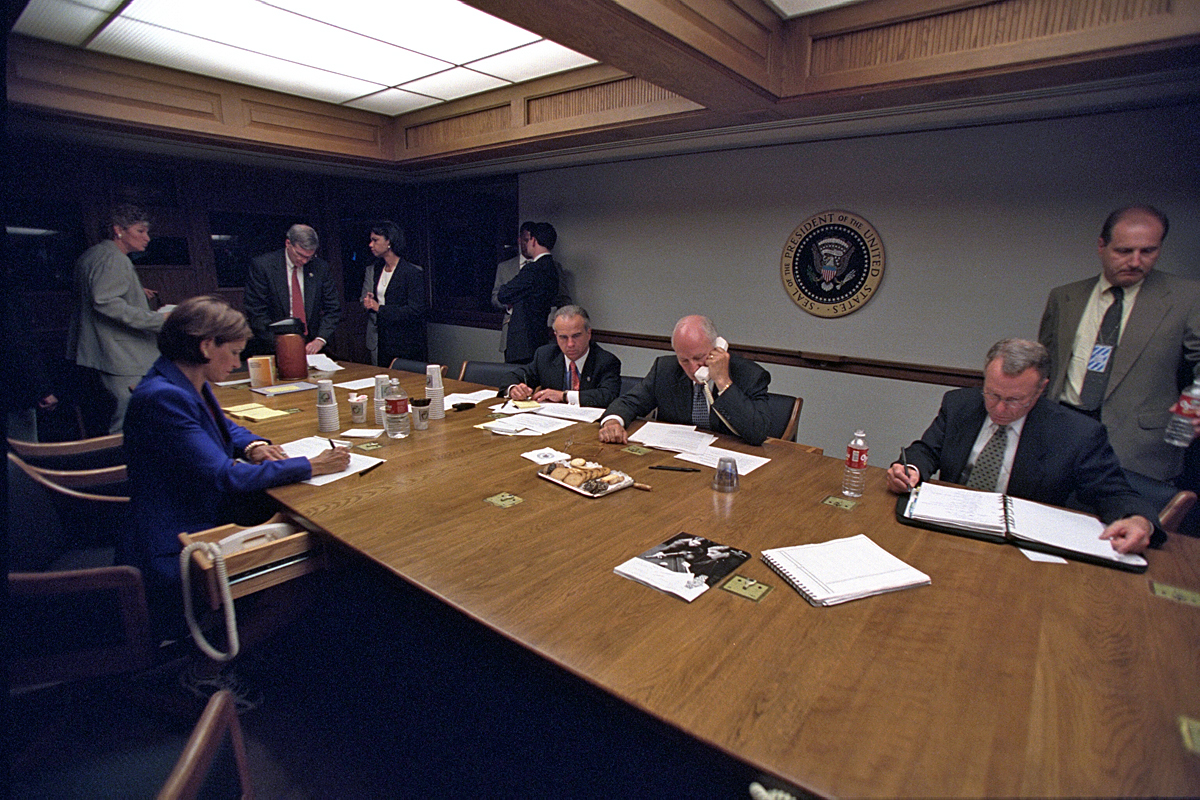 
Looking to the right provides a view of the other corner, where we see two doors: first there's a heavy metal door opening to a room with pinkish light. Next to it, at the short side of the room, there's another door which opens to what looks like a corridor with blueish light. Some people seem to come in through that door, so maybe that corridor leads to the entrance of the bunker: 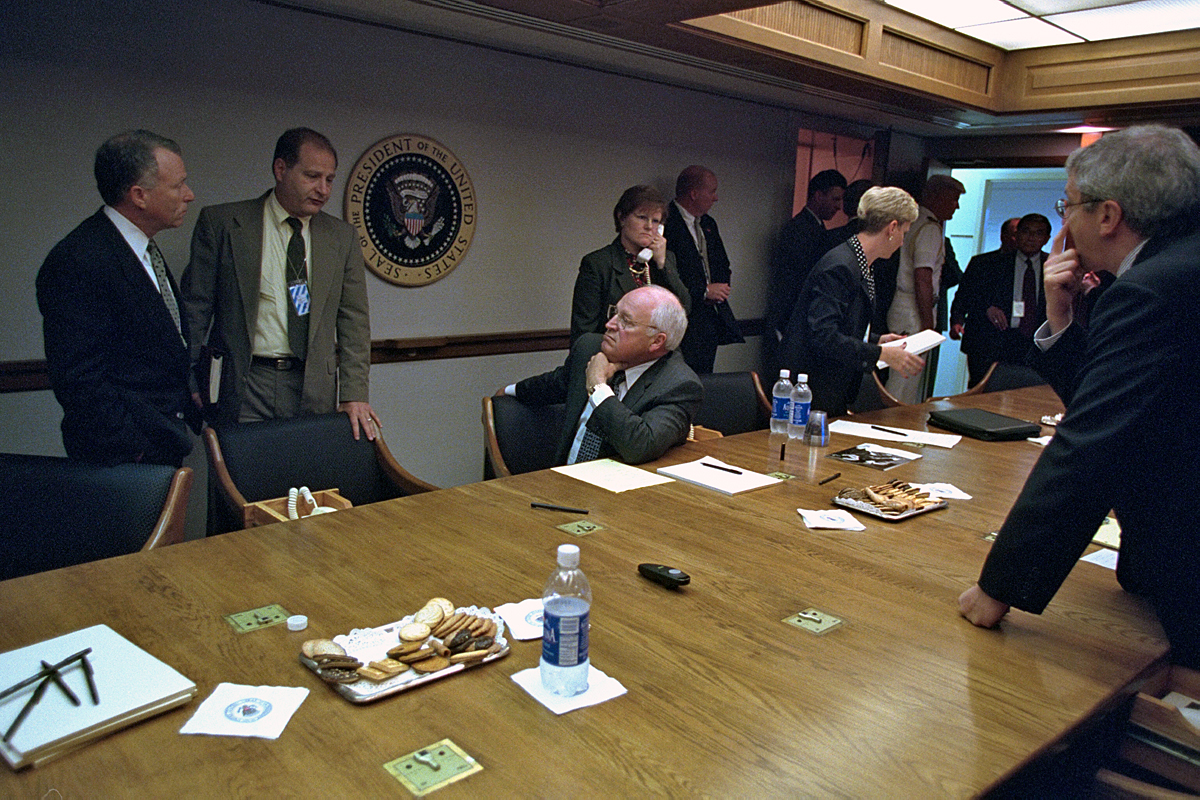 
At 6:54 PM in the evening, president Bush arrived back at the White House and joined vice-president Cheney in the Presidential Emergency Operations Center. This was captured in another series of photos. In the picture below we see Cheney and Bush, with on the right side a good view of the vault-like door, which has three heavy-duty hinges and a long downward pointing door handle: 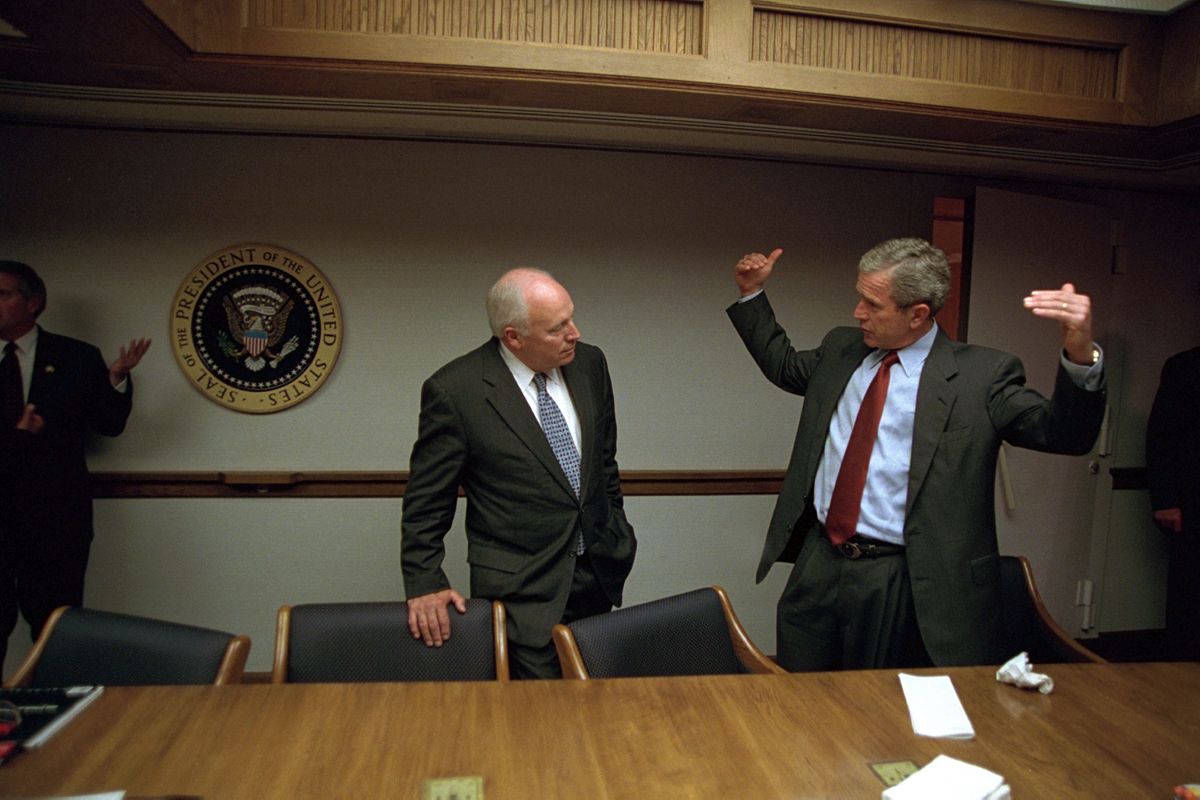 
Exactly the same type of white metal door with the long door handle, can be seen in a picture from 1962 of an office next to the Situation Room in the basement of the West Wing (maybe a door to the tunnel leading to the bunker? The current entrance to the PEOC is still a well-kept secret).


Viewing from a different angle, we see more of the wall at the other short side of the room, which was probably never seen before. At the left it has the door to the corridor, and in the middle there are wooden folding doors with handles and a lock. As there are already two banks of monitors for videoconferencing, these doors probably hide something else: 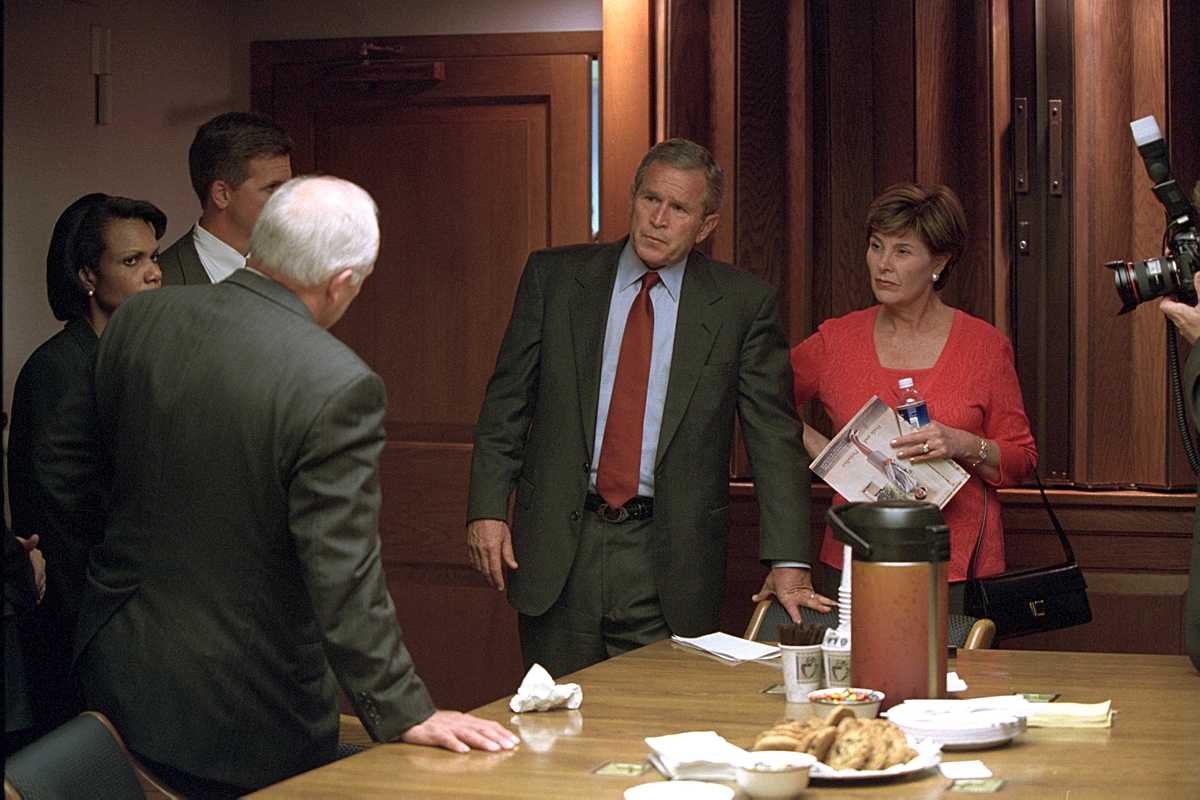 
At 9:00 PM president Bush gathered his National Security Council for a meeting in the underground shelter, as can be seen in the picture below. This makes a 360-degree view of the conference room almost complete: 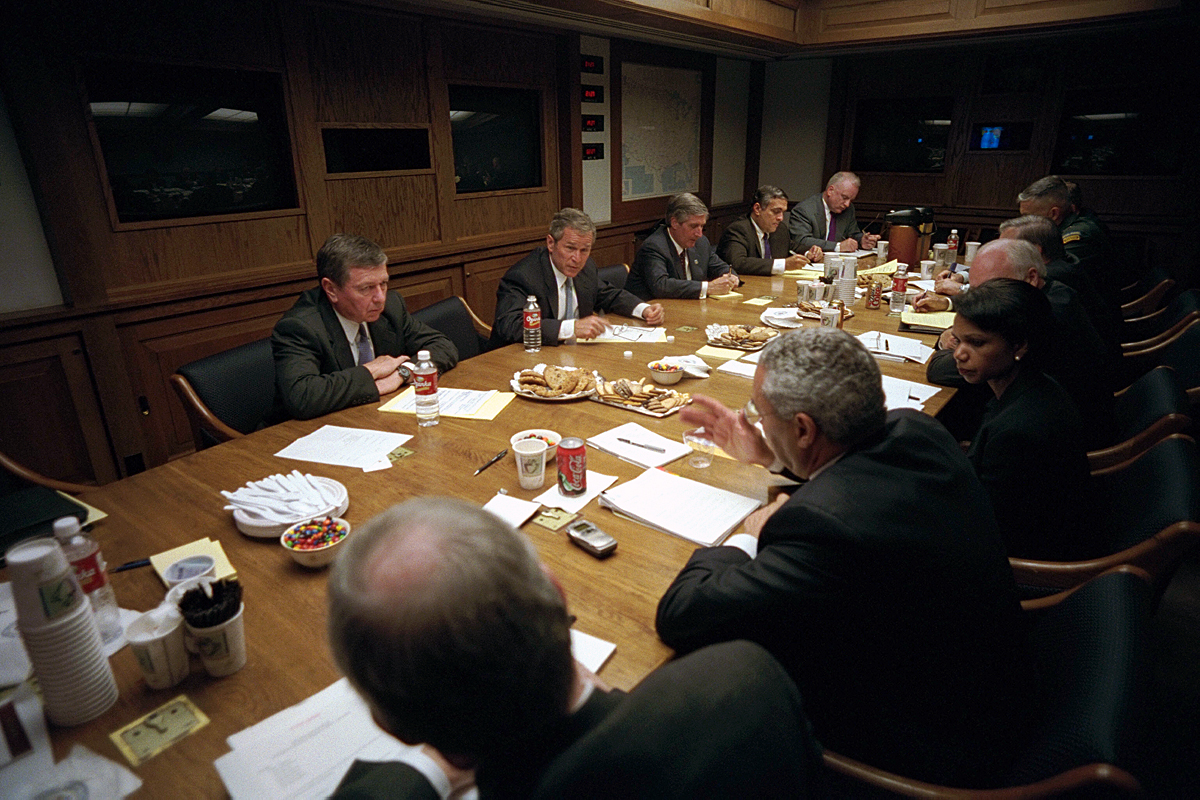 
A close look at this photo shows that something is mirrored in the glass pane for the camera of the videoconferencing system in the short side wall of the room. It clearly looks like a world map, more specifically like an automatic daylight map, which must be at the opposite wall, right of the wooden folding doors: 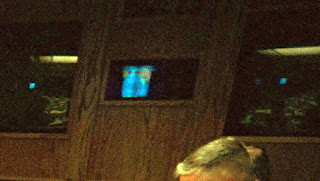 The newly released photos show the people in the PEOC conference room regularly making phone calls, using telephones that are somewhat hidden in drawers underneath the conference table. Probably just like the table itself, the drawers are custom made for a device that can be recognized as a small version of the Integrated Services Telephone (IST): 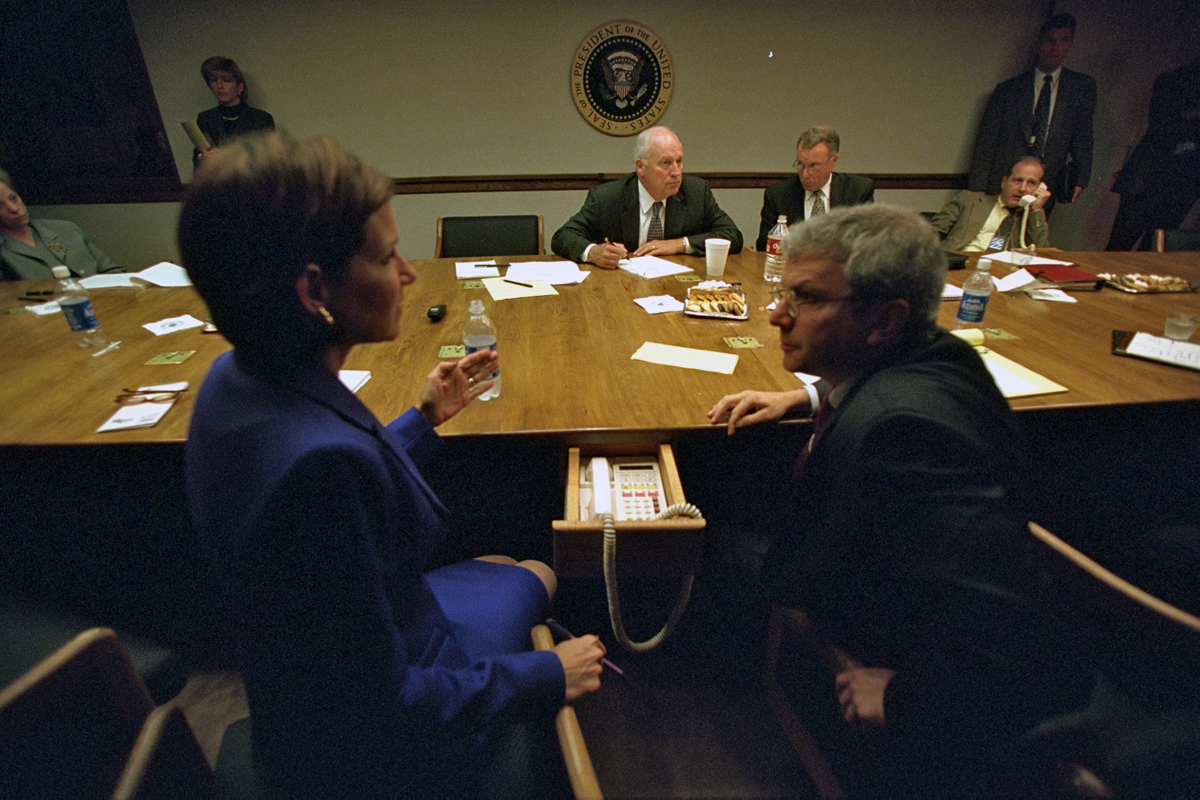 The IST was designed by Electrospace Systems Inc. and manufactured by Raytheon as a dedicated device for the Defense Red Switch Network (DRSN) and hence was called a "red phone". The DRSN is the main secure telephone network for military command and control communications and connects all mayor US command centers and many other military facilities.

The standard version of the IST has 40 programmable buttons for access to both secure and non-secure lines (therefore sometimes called IST-40). Encryption isn't done by the phone itself, but by a network encryptor, after the switch separated secure and non-secure traffic. Although the IST phone had very futuristic looks, it was gradually replaced by the IST-2 since 2003.


The phone we see in the drawers of the PEOC conference room table are about half the size of the standard IST: instead of the 40 direct line buttons, there are just 6, replacing some of the special function buttons above the AUTOVON keypad with the four red keys for the Multilevel Precedence and Preemption (MLPP) function.

This small version of the IST is rarely seen, but it was in the collection of the JKL Museum of Telephony in Mountain Ranch, California, which unfortunately was completely destroyed by a wildfire last week. 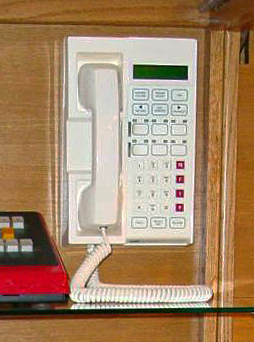 The ultimate test for these kind of communications systems is a real emergency situation. However, during 9/11, it came out that the Defense Red Switch Network (DRSN) didn't work like it should have. The 9/11 Commission report said:

On the morning of 9/11, the President and Vice President stayed in contact not by an open line of communication but through a series of calls. The President told us he was frustrated with the poor communications that morning. He could not reach key officials, including Secretary Rumsfeld, for a period of time. The line to the White House shelter conference room and the Vice President kept cutting off.

Besides the ISTs under the table, there's also a black telephone set, which sits on a shelf or a drawer underneath the wall map of the US. This phone is a common Lucent 8410, used in numerous offices all over the world. Here, it is part of the internal telephone network which is used for all non-secure calls both within the White House as well as with the outside world. 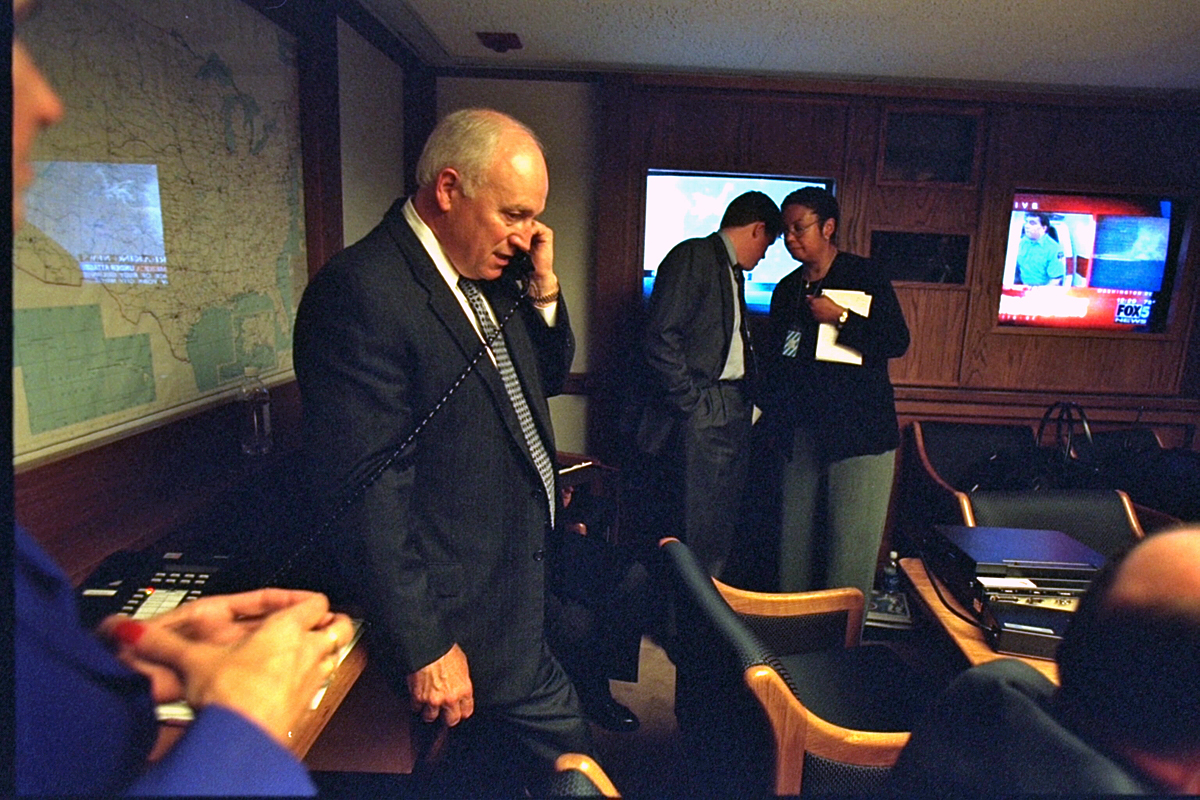 Vice-president Cheney using the Lucent 8410. On the conference table
at the right there's the thick laptop-like device
(White House photo - Click to enlarge)


On the corner of the conference table, there's also another kind of communications device: a black box, of which the upper part can be opened up like a laptop. The bottom part however is higher than normal notebooks, even for those days. It's also connected to a big adapter. Maybe it's a rugged and/or secure laptop for military purposes - readers who might recognize the device can post a reaction down below this article. 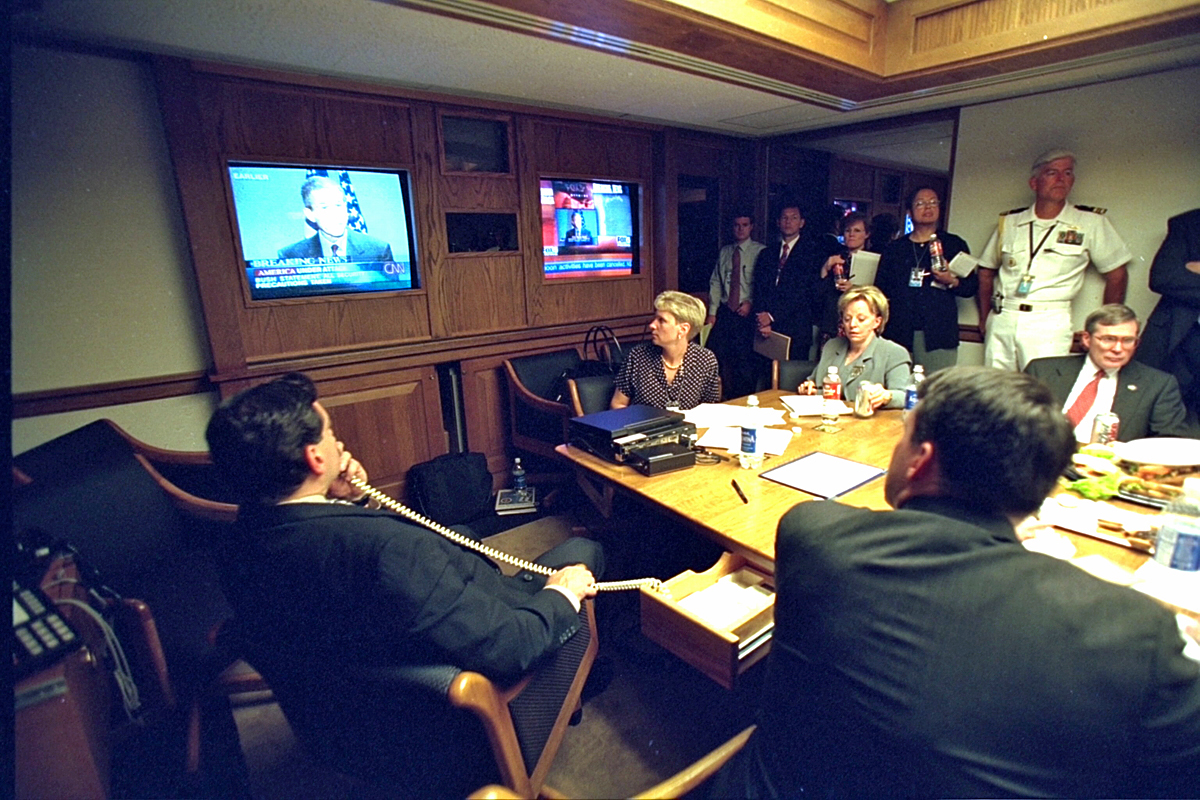 All three communications devices: the black Lucent 8410, the black
notebook-type of thing and the small version of the IST.
(White House photo - Click to enlarge)

A final photo shows then-Secretary of State Colin Powell sitting at the table in the PEOC conference room, reading a document which has a cover sheet for classified information: 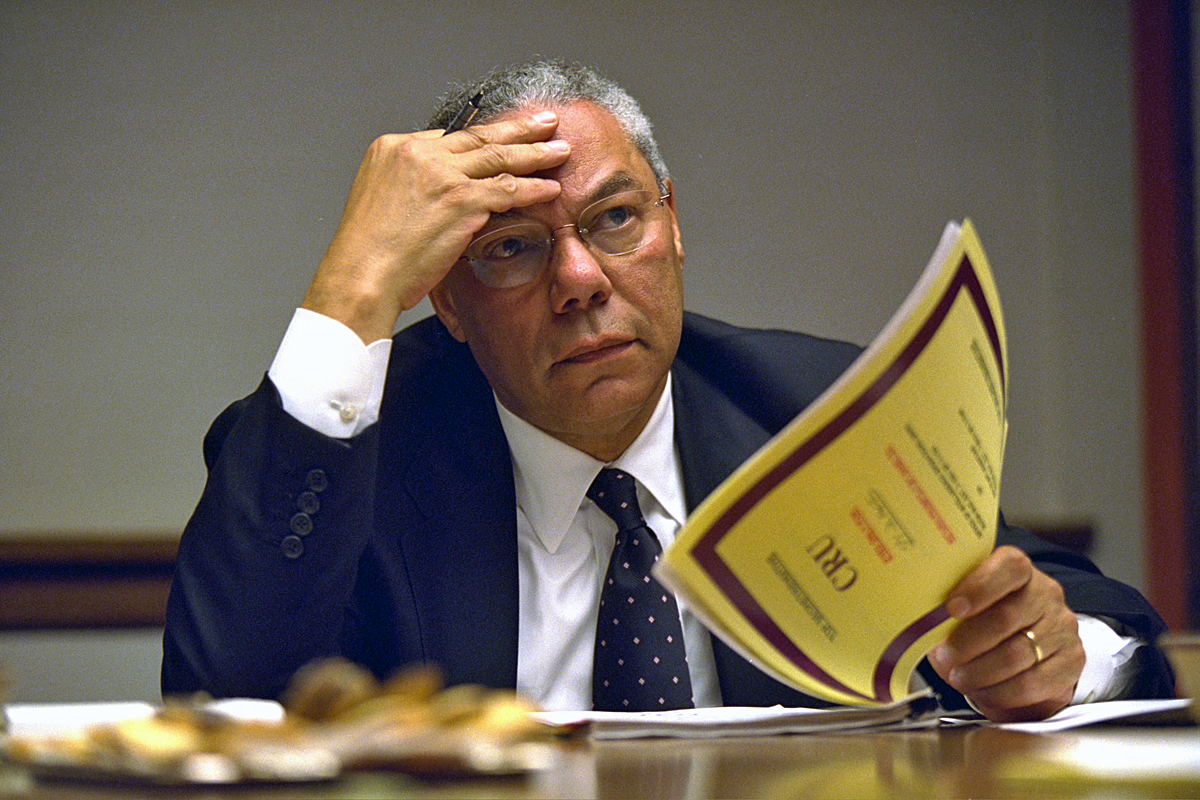 The cover sheet seems of light yellowish paper and has a broad dark red border, which is a common feature for these sheets. Most of the text isn't eligable, but the lines in the upper half read like:

The lines in the bottom half are probably the standard caveats and warnings that can be found on such cover sheets. With Top Secret being the classification level, and Eyes Only a well-known dissemination marking, the most intriguing are the letters CRU.


On Twitter it was suggested that CRU stands for Community Relations Unit, an FBI unit responsible for transmitting information to the White House. However, the website of the FBI says that this unit is actually part of the Office of Public Affairs, and as such is responsible for relationships with local communities and minority groups. Although that unit could stumble upon suspected terrorists, another option seems more likely:

After a 2009 FOIA request by the ACLU, a 2004 memo from the Justice Department's Office of Legal Counsel about the CIA's detention program and interrogation techniques was released. The classification marking of this memo was blacked out, but on one page this was forgotten. It read: TOP SECRET/CRU/GST.

In a job posting this was written like "CRU-GST", which indicates GST is a compartment of the CRU control system. Meanwhile we also know that GST is the abbreviation of GREYSTONE, which is a compartment for information about the extraordinary rendition, interrogation and counter-terrorism programs, which the CIA established after the 9/11 attacks.

Because Powell is reading the CRU-document on September 11, 2001 itself, the CRU parent-program must have been established somewhere before that day. It's still a secret what CRU stands for, but it probably covers information about highly sensitive CIA operations. 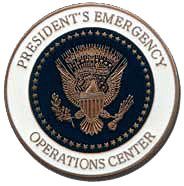 Links and sources
- Wikipedia: Timeline for the day of the September 11 attacks
- 9/11 Myths: Dick Cheney at the PEOC
- New York Times: Essay; Inside The Bunker (2001)

hopefully information 9/11 inside the White House emergency bunker can give you answers about what you ask to google, and hopefully you can determine the gadget that suits your needs.

you just read the article titled 9/11 inside the White House emergency bunker if you intend to book mark mark or share please use link https://syafiqzulkarnain2.blogspot.com/2015/09/911-inside-white-house-emergency-bunker.html.