With http://syafiqzulkarnain2.blogspot.com /2015/02/photos-part-1-lync-skype-for-business.html" target="_blank">Part 1 of this series I introduced you to a tool that will allow you to convert photos into a format suitable for importing into Active Directory, Exchange, or Exchange Online. These photos are used across the whole Office product line, including Lync/Skype for Business, Exchange, Sharepoint, Office 365, etc. After creating these images, the next step is to import them into either Active Directory and/or Exchange 2013. The final outcome is having glorious photos appear in your Office applications!
So once again, to try and save everyone a lot of pain, I've made a tool that will hopefully make importing these images a breeze.
Exchange / AD / O365 Photo Importer
The aim of this tool is to be simple and flexible as possible to take the pain out of importing photos in any scenario. 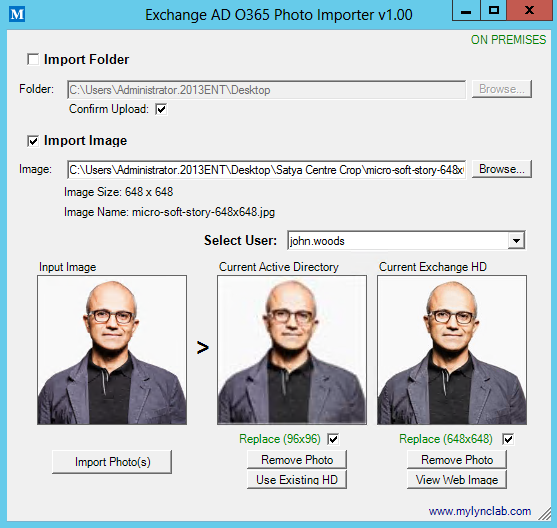 The tool is designed to gracefully fall back to support whatever level of Powershell commands that are available to it. So if you were to run it on a machine that only has access to Active Directory commands it would only allow you to import Active Directory photos, and so on. Ideally you should have access to both Active Directory and Exchange commands for an on premise deployment. For Office 365 you will need to remotely connect to Exchange Online (see the next section for details of how to do this).
There are a few things that you should understand about how the Powershell import commands work before using the tool. The Exchange import command (Set-UserPhoto) supports the importing of any sized file JPG file into the system. If the file is not square in shape then Exchange will do a “centre crop” (as explained in my http://syafiqzulkarnain2.blogspot.com /2015/02/photos-part-1-lync-skype-for-business.html" target="_blank">previous post) on the image and convert it to 648x648 in size then import it into the user’s mailbox. At the same time as doing this Exchange will also import a 64x64 sized image into Active Directory.
The Active Directory import command (Set-ADUser -identity $name -Replace @{thumbnailPhoto=$photoBytes}) does not support the same fancy cropping and resizing capability as the Exchange command does. Instead it will import the raw bytes that it is presented into the thumbnailPhoto attribute in the Active Directory database. The thumbnailPhoto attribute will accept images of up to 100KB in size. However, it’s not recommended to import files that are that big into Active Directory as it can add a great deal of size to the database which can result in much larger amounts of replication traffic between Domain Controllers. If you import an image into Active Directory and there isn't currently a HD image in exchange, then the AD image will also be displayed by the Get-UserPhoto command in exchange as well.

Now that you have an overview of how the commands work we can go into some depth about how the tool works. The tool displays three images, the left most image (Input Image) is a preview of the image that you are going to import into the system. You can select this image by either dragging and dropping the image from your PC (see requirements section for more details of this), or by selecting the browse button under the Import Image section. The middle photo is the current Active Directory photofor the user highlighted in the Select User dropdown box. The rightmost photo is the current Exchange HD photo for the user highlighted in the Select User dropdown box. If the user does not have images in either of these locations then a generic missing photo image will be displayed by the tool. If the tool has not been able to access the necessary commands to get to the photo a “Not Accessible” message will be displayed. If the user does not have a Mailbox a "No Mailbox" image will be displayed.
When using the tool you may choose to import a single user photo or you might want to import a folder full of images. The tool will allow you to do both by selecting the Import Folder or Import Image checkboxes respectively. When the tool opens a file it will automatically select the import option appropriate for the image size. If the photo is 96x96 or smaller, then the Active Directory import check box (Replace 96x96) will be selected. However, if the image is larger than 96x96 then the Active Directory (Replace 96x96) and Exchange (Replace 648x648) import checkboxes will both be selected. In the case that both of the checkboxes are selected the tool will first import the image into Exchange (which will automatically import a 64x64 image into Active Directory) and then the tool will resize and import a 96x96 version of the image into Active Directory (ie. over the top of the smaller 64x64 image).

When you select to import a folder you have the choice of seeing each image as it is imported and selecting whether you want to import the image or not. This by default is the operation of the tool, however, you may wish to import all of the photos without confirming each file. This is done by unticking the Confirm Import checkbox. When importing folders, the files within the folder need to start with a name that matches the user name in Select User dropdown box (which is the user's SAMAccountName from Active Directory for On Premises, or the Alias/Username from Office 365). The tool will allow you to have extra information in the file name, however, additional information must be separated from the user's name by a space character (space is used because it can’t be used in a SAMAccount name or Alias/Usernames in Office 365). For example, you may have a file named “John.Smith 648x648.jpg” which the tool will import for a user with the SAMAccount name of “John.Smith”. However, you cannot have the name “John.Smith648x648.jpg” because it doesn't have a space character between the name and additional test which means it isn't an exact match for the John.Smith user in the dropdown box. The important point to take from this is that you need to be precise in the naming of your images for a Bulk import. In summary:
On Premisis File Naming: SAMAccountName
Office 365 File Naming: Alias/Username
Note: Image file names must begin with the user's name following the convention above and must be divided from any other text in the file name by a space character.

The file naming for a bulk import is your most important job! After doing this you can kick back and let the tool do its work.

The tool has been designed to support importing HD photos into Exchange Online. However, the commands used to connect to Office 365 via Powershell may be slightly different than what you usually use. So Office 365 admins - pay careful attention to this section!
Create an O365 session:
$Session = New-PSSession -ConfigurationName Microsoft.Exchange -ConnectionUri https://outlook.office365.com/powershell-liveid/?proxymethod=rps -Credential $cred -Authentication Basic -AllowRedirection
Note: You must include the “?proxymethod=rps” part of the URI in order to import images into Exchange Online. If you don’t do this, the import will fail with a (413) Request Entity Too Large error.
Enter O365 credentials: 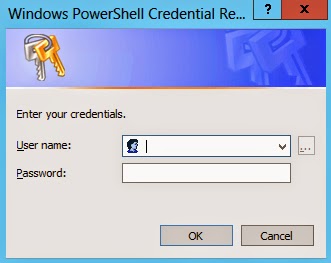 Import the session into Powershell:
Import-PSSession $Session
After you have done this, you can run the script in the same Powershell window and import photos. 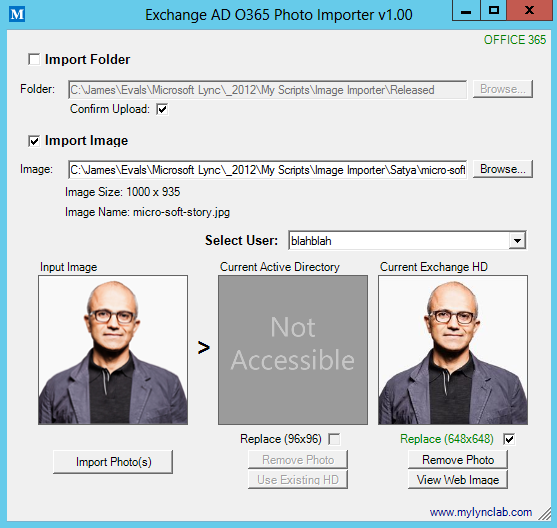 There does appear to be a maximum image file size that you can upload to O365. However, it seems to be more of a practical size limit rather than an enforced one. I have uploaded images up to about 6MB in size before, however this is a very slow process and you can run into random errors during the process. It can also take a long time (5-10 minutes) to import very large images directly into the Exchange Online server. When the photo has been uploaded the Exchange server will resize the image before saving it to the user’s mailbox. For the aforementioned reasons I would recommend reducing the size of this photo before trying to upload to Exchange Online. My suggestion is that you use my http://syafiqzulkarnain2.blogspot.com /2015/02/photos-part-1-lync-skype-for-business.html" target="_blank">Image Creator Tool to reduce the size of your photos to 648x648 before you try to upload them.

I have found that Office 365 doesn't like you uploading photos for the same user multiple times in a row (ie. a bulk import with many photos for the same user name). If you do this you will get errors back from O365. However, if you are bulk uploading to different users it seems to work fine. If you start experiencing random errors when trying to upload or get images from Office 365 try disconnecting the current session and open a fresh Powershell session.

On occasion when uploading an image to O365 the upload process will work successfully (no errors in the PS window), however, the image will not be available to be viewed immediately after a successful upload. Majority of the time this is not the case but occasionally it will take about 10 seconds before the photo can be viewed. In this time the tool will display the generic no photo silhouette picture. If this happens, be patient and refresh the user photo by reselecting the user from the 'Select User' drop down box.

Well, that’s photos in the bag! You should now be able to convert and create images as well as import them into an On Premises system or an Office 365 tenant. Hopefully this makes your life much easier. Let me know if you have feedback and enjoy!