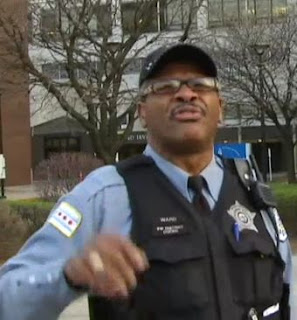 On March 20th, 2012, Chicago Police were responding to an unfortunate event in which an innocent, young girl, was killed in a shooting. CPD was at the hospital to continue their investigation. NBC reporters arrived at Mt. Sainai Hospital in Chicago to cover this story and were originally standing in front of the hospital when either security or police, asked them to move. The reporters moved to a middle road median where no pedestrian or vehicle traffic were being obstructed. What is unique about this story that Shortwave America decided to cover it once someone reached out with the link? As usual, a Mt. Sainai Hospital security guard who had nothing better to do but tow a party line (probably to get into the good graces of CPD) made up a blatant fabrication about NBC 5 reporters attempting to get past him and into a secure area of the hospital.

This was a perfect time, place and circumstance for this guard to get his fifteen minutes of fame and also set up the media for a first amendment fight. What actually happened is that Chicago Police ended up making themselves look bad.

Enter CPD Officer Ward, star#13603, who approaches the news crew...you HAVE to watch the video to actually believe this stunt Ward decided to pull off!! (We would LOVE love to see his TRR or other written statement issued to the Department)

Wait, OFFICER WARD...did the public just hear you right? "Your First Amendment rights can be terminated if you're creating a scene or whatever," the officer said. (NBC Chicago quote)

Ward also said these things: "Your presence is creating a scene.", "Just cause you sue don't mean you gonna win", and just before he pulled out the cuffs, Ward transmits over the zone to ask if he can lock these journalists up  while saying ON THE AIR he "has no problem with it". Ward's use  torture of the English language indicates he has spent way too many years on the streets and that he has no worries about looking / sounding like an idiot. Does the old wise saying apply here that if you hang out with trash you start to sound like trash?

Ward is assigned to the 010th district on beat 1072 (Wagon Officer). For those readers who don't know, the wagon is where the Chicago Police Department sends officers who have a history of misbehavior or other disciplinary problems. Ward has been dumped off of midnights in this and other districts because he needed to be actively supervised.

Ward served time in the U.S. Armed Forces where, similar to his Chicago Police career, he never made any significant rank or achieved any position of responsibility.

Also on scene were Sgt. Avila, and one other Sgt. whose name currently escapes memory. Here they are in these photos: The cool head you witness with Sgt. Avila is who he was as a street officer as he earned his Sgt. stripes the old fashioned way...through hard work!

The general details of career of the Sgt. pictured directly above are pending.

Chicago Police said this about the incident:

"The Chicago Police Department did not charge anyone with criminal trespass in connection with yesterday's incident, which involved the unfortunate and senseless loss of a young child. We removed two individuals from the hospital at the request of hospital security guards, who asserted that the individuals had tried to go past them into secure and private areas of the hospital. The security guards declined to press charges and the individuals were released.


Our members were attempting to protect and respect both the grieving family members of the child, and the memory of the child herself during a very stressful time for all parties involved.


As always, we will carefully review the allegations in the event further action is warranted."

All good and fine, an honorable thing to do on part of the Chicago Police Department, but was THIS the way to accomplish this goal?

The well known and award winning Chicago Police Department blog, Second City Cop, makes no mention of this in their March archives at all. Maybe it was too much of an embarrassment? Maybe they are sticking together a bit too tightly again as in the thin blue line of silence? Maybe IAD is investigating a CR#?

The lesson here is multifold: 1. There is no law in Illinois that says anyone HAS to follow any given order given by the police unless the person defying such order does so at the immediate detriment of public safety. 2. Certain officers have egos that are writing checks they just can't cash. 3. Some officers have good intentions that go too far. 4. The first amendment cannot be "terminated" unless by court order or immediate and grave threat to public safety and even then, the first amendment still stands when a person or persons are relocated to a safer area. 5. When in doubt of an officer's words, always do what you can within reason to immediately summon a police supervisor. 6. Passive, non-violent, educated, civil disobedience can serve a valid purpose.

There will be more on this story if anything becomes available.Photos, quotes, and video courtesy of NBC 5.