Home » Unlabelled » The Real Significance of the New iPad

The Real Significance of the New iPad

By Unknown di Maret 09, 2012
The Real Significance of the New iPad - we should be concerned about the development of technology, because the technology selelu give us ease in doing activities, on the blog Techno Review we will discuss a lot of gadget technology from the review spec and price, now we will discuss first about that in your search that is The Real Significance of the New iPad please refer to the infromasi we will convey in full:

The Real Significance of the New iPad

The reactions to the New iPad announcement this week were all over the map.

Some places said it was basically a yawner (link), while others bought into the "end of the PC" rhetoric (link) .  Some people even warned all developers to stop programming for the keyboard and mouse, even for complex applications like computer-assisted design (link).

My take: I think the announcement was both more and less important than people are saying.  Here's why:


This is not the end of the PC era

I'm sure I'll get some push-back from people who disagree, but I think the whole "PC era" meme from Apple is self-serving hype.  Of course they want to convince you that the world is shifting away from a market where Apple has less than 10% worldwide share to a market where Apple has well over 50% share.  I'd say the same thing if I still worked at Apple.  And the iPad is shiny and sexy, while Windows PCs are old and boring, so I want to believe that the PC is dead.  It makes me feel all Jetson-y. But think about it rationally for a minute.

First of all, what exactly was the PC era that is now supposedly ending?  Was it the years when Windows was the dominant API for software innovation?  That ended in the late 1990s with the rise of web apps.  Was it the era when PCs outsold smartphones?  That ended last year.

To many people, the end of the PC era seems to mean that tablets are starting to replace PCs as thoroughly as PCs replaced minicomputers.  Or that the keyboard and mouse are going away.  I don't buy it.  We've been declaring the PC dead for at least 15 years, but we're still using them today because for certain tasks, PCs are the best way to get work done.  It may be unsexy and it may seem old-fashioned, but if you're working on a big spreadsheet a mouse and numeric keypad are incredibly productive.  And if you're writing a report, a keyboard is still the easiest way to input text (for now) and edit (for the foreseeable future).

Kind of like a steering wheel and pedals are still the best way to drive a car.  I could do that with a multitouch tablet as well (three-finger swipe to the right means turn at the next corner, four fingers down means apply brakes), but sometimes direct control is the best approach.

My point is not that touch and speech input and tablets are useless.  I think they're great, and I've been playing with them for more than a decade.  But I'm going to have the most productivity if I can choose the best tools for a particular job, and that means I still need a pointing device and keyboard for some sorts of work.

Now, if Apple were saying that the PC will be less dominant than it was in the past, I'd have no trouble with that.  Although we're not seeing the overall death of the PC, we're definitely seeing a narrowing down of it.  For tasks like reading or interacting with content, a tablet is far superior to a traditional PC, and if that's all you do with your PC, by all means get rid of it.  But PC-like devices (or maybe mice and keyboards that connect to tablets) are going to linger for the sorts of work that they do best.

So if you have a touch-sensitive screen connected to a keyboard and mouse, do you call that hybrid device a PC or a tablet?  I don't really care; it's a game of semantics at that point, and semantics are the playground of companies that want to score marketing points.  Which brings us right back to Apple and its enormous tablet market share.

(Oh and by the way, the tablet needs a stylus for certain types of work.  One of Steve Jobs' strengths was his willingness to revisit his assumptions when he was wrong, and this is one of those cases.  I worry that since Jobs died, Apple may now get locked into his religious opposition to the stylus.  That would leave Apple vulnerable to a competitor who does the stylus right by tuning the hardware and software to work together.)


What does matter about the new iPad

Two things stand out to me.  The first is the screen.  Yes it's very pretty, but that's not the point.  The Retina display is a very nice feature in a smartphone, but in a tablet it's far more important because tablets get used more for reading long-form text like novels, textbooks, and magazines.

For displaying photos and videos, enormous screen resolution isn't actually all that important; what matters most is color depth.  If you have millions of colors, the pixels blend together and most images look real even at 150 dots per inch.  But for reading, where you have sharp contrasts between black text and white background, much higher resolution is needed.  At 264 pixels per inch, the new iPad's screen is close to the 300 dpi resolution of the original LaserWriters, which most people found an acceptable substitute for printed text, and which drove a revolutionary change in publishing.  I doubt Apple's display has the same contrast ratio as printed paper, which is also important for readability, but I still think it's likely to give a much nicer reading experience to all those students who are supposed to use iPads as their new textbooks.

Apple posted a clever widget that shows a magnified image of text on the old and new iPads.  I pasted an image from it below.  Yes, in real life the dots are tiny and it will be hard for some people to see the difference.  But eyestrain hinges on little details like this, and as a longtime publishing guy, I can tell you that resolution matters. 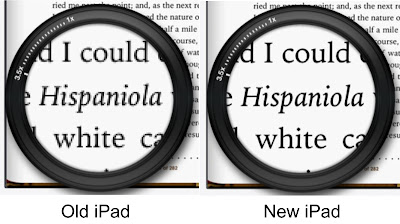 On most other hardware specs, the iPad is very good but not overwhelming.  Gizmodo has a good comparison here.  It shows that the upcoming Asus Transformer matches up pretty well on a lot of the specs, although it's a bit pricier and has less powerful batteries.  You could be forgiven for thinking that Android's within striking distance of iPad.

But then there's the software, and this is the second place where I think the new iPad stands out.  As a systems vendor, Apple innovates in both hardware and software, so you have to look at both areas to understand the full iPad offering.  Apple is innovating very aggressively on the software side.  Speech recognition is now being bundled with iPad, and although as I just said I don't think it's ready for writing a long report, Apple has a history of tuning and improving its technologies over time, and I bet we'll see that happen with speech.  The keyboard isn't dead, but if Apple makes speech work well, the tablet can more thoroughly displace the PC in a few more use cases (like creating short messages).

Then there are the new iLife tablet apps, which were probably the most compelling part of the whole announcement.  I'm very impressed by the way Apple refactored photo editing for touch, and I can't wait to play with it.

Add together the high-res screen, the long-term path for speech, and the new apps, and the new iPad looks like a formidable product.

Think of it from the perspective of an Android tablet product manager.  You don't just have to beat Apple on hardware, but you also have to figure out how to duplicate a rapidly-growing list of Apple-branded software features that are either bundled or sold at ridiculously low prices.

Yes, Google is working to copy any features that Apple adds, but how good is it at integrating UI functionality and crafting exquisite applications?  Would you want to bet your product on Google's ability to craft end-user software?

And thanks to Apple's volumes and wickedly controlled supply chain, its prices are low enough that no products other than Amazon's subsidized tablets can get down under them.  So as an Android cloner, you're stuck at rough parity on price, and you are increasingly falling behind on integrated software features.  It's an ugly life.

And then there's Microsoft

It'll be interesting to see how Microsoft deals with all of this.  Windows 8 is an effort to recast Windows for tablets, but will Microsoft be willing to go toe to toe with Apple on app pricing?  Undoubtedly not; that would involve giving up most of the Microsoft Office revenue stream.  So Microsoft has to walk a difficult line in which it embraces touch tablet functionality, but attempts to convince people that they still need to pay big bucks for good old Office.  The first try in that direction, Tablet PC, demonstrated that you can't just cut the keyboard off a PC and call it a tablet.  Windows 8 is much more tablet-centric, but if it makes people feel like they're buying a tablet, they may start looking for tablet-like pricing in their apps, and Office sales could collapse like a house of cards.

just so much information The Real Significance of the New iPad

Related : The Real Significance of the New iPad