By Unknown di Maret 26, 2012
Class 95 FM Special Event - Corrinne May - we should be concerned about the development of technology, because the technology selelu give us ease in doing activities, on the blog Techno Review we will discuss a lot of gadget technology from the review spec and price, now we will discuss first about that in your search that is Class 95 FM Special Event - Corrinne May please refer to the infromasi we will convey in full: 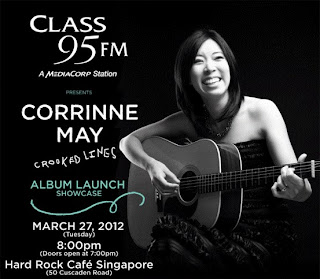 Shortwave America has recently learned about a new artist who has been around for the last few years, and has actually been officially called Singapore's MOST SUCCESSFUL! As it happens, there is a radio connection here...so, we're covering it. Class 95 is sponsoring the "Crooked Lines" album launch tomorrow, March 27th 2012 at the Hard rock Cafe' in Singapore (at Cuscaden Road). LISTEN TO CLASS 95FM HERE

Corrinne May has watched her last 3 albums sell over 30,000 copies in Singapore alone. From Corrine's bio page at her Official Website: "Born in Singapore, but now based in Los Angeles, Corrinne May didn’t always think she was going to be a musician. It wasn’t exactly looked upon as an ideal career to most practical-minded Singaporeans." "She trained in classical piano from the age of 5 and won her first songwriting competition at 15. Thankfully, that soon gave way to more artistic pursuits. She honed her love for Shakespeare with an honours degree in English Literature at the National University of Singapore, and pursued her passion for songwriting and film-scoring at the Berklee College of Music in Boston, graduating with a Bachelor of Music. She then moved to Los Angeles to pursue her musical aspirations."


National Recognition: "In recognition of her contributions to the Singapore and regional music scenes, Corrinne received the Young Composer of the Year award and Wings of Excellence award from COMPASS, the performing rights society of Singapore, in 2007. She was also honoured by her alumni, the National University of Singapore who presented her with the ‘Outstanding Young Alumni Award’, and she represented Singapore at the MIDEM conference showcase in Cannes, France in 2008. In 2010, Corrinne May was commissioned to write the National Day Theme Song for Singapore’s National Day. She sang her composition ‘Song For Singapore’ at the Padang in front of a 40,ooo strong crowd and the song was also telecast in a live broadcast to the whole nation."

Here is the newest Singapore radio hit by Corrine May:

just so much information Class 95 FM Special Event - Corrinne May

hopefully information Class 95 FM Special Event - Corrinne May can give you answers about what you ask to google, and hopefully you can determine the gadget that suits your needs.
you just read the article titled Class 95 FM Special Event - Corrinne May if you intend to book mark mark or share please use link https://syafiqzulkarnain2.blogspot.com/2012/03/class-95-fm-special-event-corrinne-may.html.